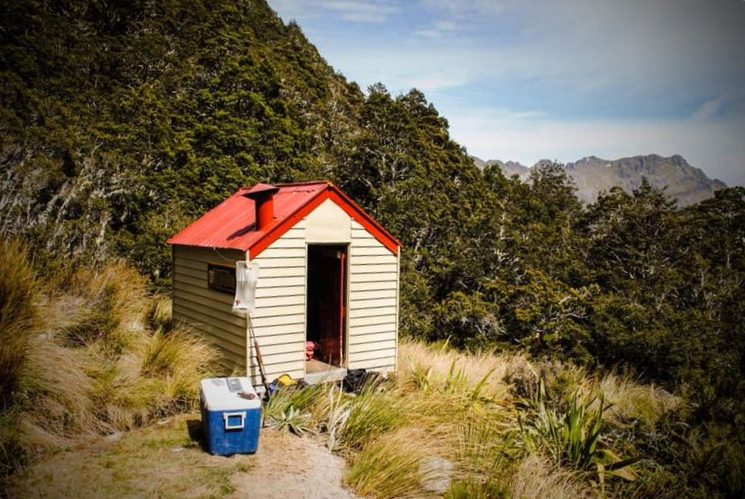 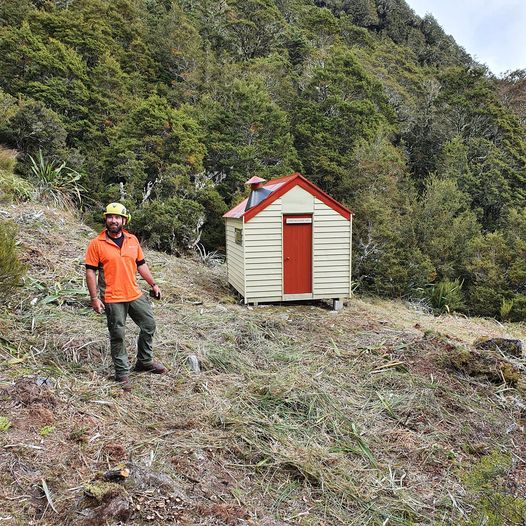 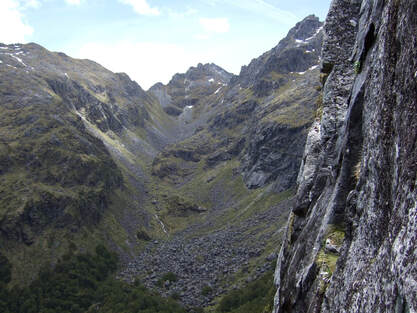 The saddle at the head of Shaw Stream: Photo Glenn Johnston
Maintenance Status
Top Waitahu Biv is designated as minimal maintenance. There are no cut tracks or marked routes to it.

Location
Waitahu River catchment. Map: Springs Junction BT22. Grid Ref: NZTM E1526378/ N5327146 (BT22 264 271). Altitude 1260m. Waitahu Biv is located in the head of the Waitahu valley, which is a tributary of the Inangahua River. The Biv is is slightly further down the creek than marked on the topo 50 map, and below the bush-line. DOC warn of a low-risk of avalanche, although the Biv hasn't been hit by anything of that nature since it was built in 1968. Because of the relatively difficult access foot visits to Top Waitahu are generally few in a given year (someone recently worked out that the average was around 2.6 per year). 2017 appears to have been some sort of aberration, with eight visits.

Access
Most of the visits to Top Waitahu are fly-ins to hunt Chamois, although a fit party can make it here in a long day from the roadend. The most direct route is up Lake Stream from SH77, several kilometres West of Rahu Saddle. The start of the track up Lake Stream is sign-posted and parking is available several hundred metres up the road next to a passing bay. The track is usually well marked and maintained, and at last report (April 2018) was in good condition, with only a couple of minor bits needing attention. Allow around three hours to reach Lake Stream Biv. The route from here is up the Stream to the head of the valley and onto the ridge East of point 1568m. A traverse of Ivess Peak would probably require some technical climbing skills and gear, so the usual option is to follow the ridge North of point 1568m and drop off down the spur on the TL of the large tarn.

Drop from the tarn's outlet creek down to the bushline above Shaw Stream and sidle upvalley through sub-alpine scrub and speargrass under the large bluffs below Ivess Peak. Aim for the headwaters of Shaw Stream between the 1200 and 1300m contours, then follow the creek up to the saddle between points 1730m and 1620m. With good visibility the Biv can be seen from here and a line found to it through the abundant speargrass and sub-alpine scrub. Allow 3-3.5 hours from the large tarn to the Biv.

Type
Top Waitahu Biv is a two-bunk design built in 1968 and is unique in having a small enclosed wood burner that provides efficient cooking and heating. Water is from a stream close by. There is no toilet.

Condition
Top Waitahu Biv should be in excellent condition currently. It received an upgrade in 2004, including repainting and new mattresses, and in 2021 DOC went in and did some more minor maintenance and site clearance. They extended the fire hearth was extended, sanded and painted the window sill and door, removed all the lead-head nails and replaced them with tech screws, replaced the lead-flashed ridging, placed a new sheet of iron over the flue section of the roof and a rubber boot around the flue, covered this with a kea proof collar, and repaired the flue cowling.

Routes
It is possible for a fit party to access Top Waitahu Biv in a day up the Waitahu River from Montgomerie Hut. Head up the Waitahu river flats, crossing and recrossing where necessary. The TR terrace can be traversed to cut the corner before the confluence with Shaw Stream. Above Shaw Stream the River is attractive and easy travel. Continue to zig-zag between respective river terraces, using the TL to sidle around a steeper section of River above point 557m. The valley widens significantly just before the River veers SE to its headwaters. The last section is steep initially, but widens out on the TR, where travel is comfortable. Some large clearings visible on the topo map provide good camping below the bushline. The valley continues to narrow, but travel remains straightforward. It is probably best to follow the creek leading directly up to the Biv. A tempting looking spur to the bushline requires a bash/ sidle westward through alpine scrub to reach the Biv. Be prepared for nine hour plus day from Montgomerie Hut to the Biv.