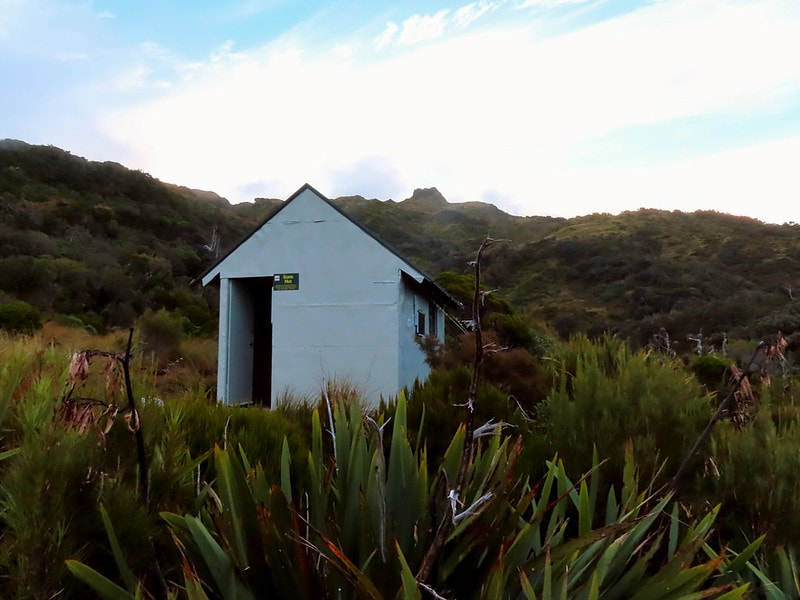 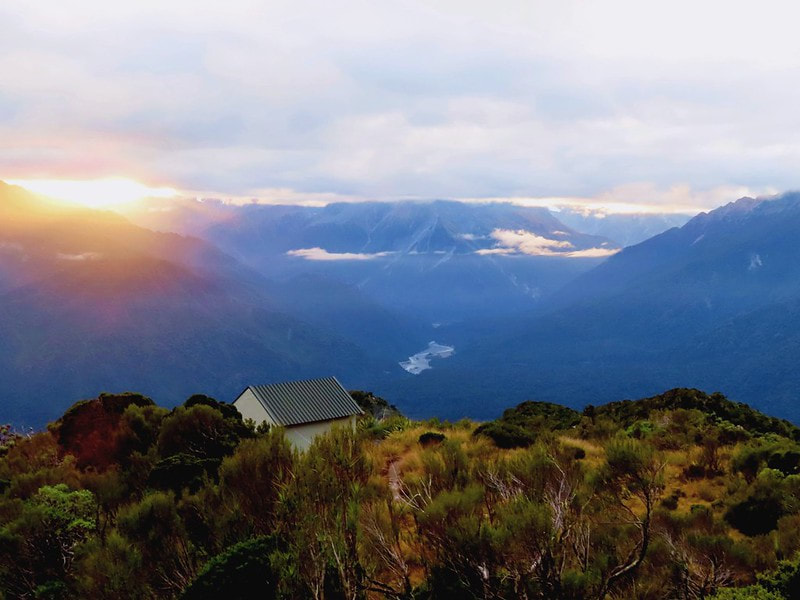 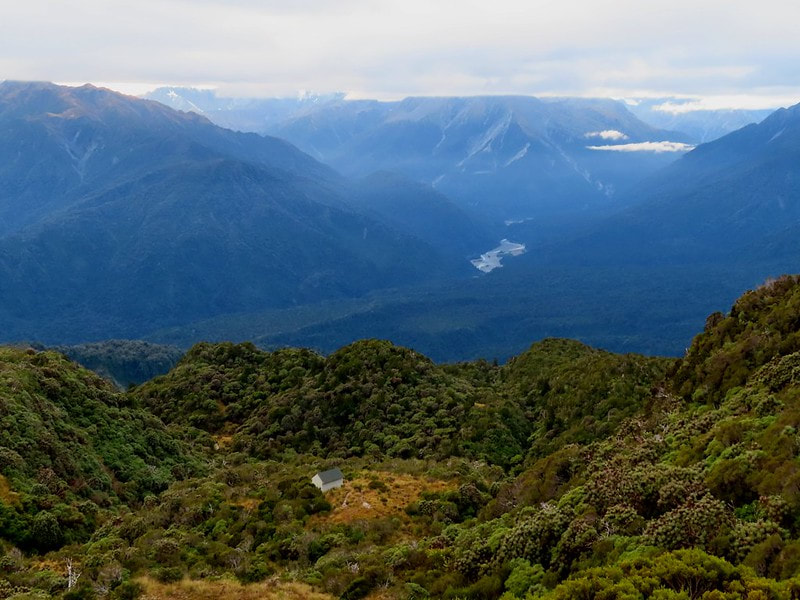 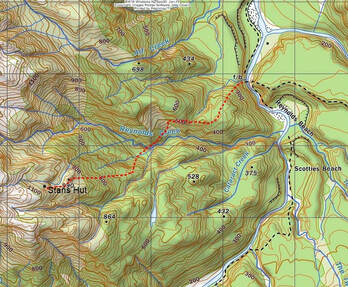 Untracked route to Stans
Maintenance Status
Stans Hut is designated for public use, overseen by DOC, but owned and maintained by the NZ Chapter of the Safari Club Inc. It was originally built as a private hunting hut by the late founding member Stan Peterson of Hokitika who gifted it to the Club in the early 2000's.  Stans Hut  has pretty much always been the exclusive province of fly-in hunters. There are currently no maintained routes or tracks providing direct valley access to it and the rare foot visits have been by parties traversing the Price Range. The Permolat group would like to put a track in from near the Whataroa/ Perth junction and is currently exploring this option with DOC. Stans Hut has a $5 per night fee for non-members which can be paid to the Safari Club NZ: 02-0636-0099560-00. The contact for bookings is 021-328-197.

Location
Whataroa catchment. Map BW16. GPS Ref: E1389518/ N5196435. Altitude 1056m. Stans Hut is located on a tussock bench in the  alpine scrub zone on the Price Range. The views out over the Whataroa and up the Perth valleys are breathtaking and the open tops behind the Hut easily accessed by means of a short section of track through the alpine scrub. Chamois and deer are the main attraction for the hunters who average around six fly-ins per year. There were only two foot visits recorded in the hutbook which went back to 2007 when I bashed my way up through the scrub in 2022. The last of these was in 2012.

Access
Historically, three NZFS tracks provided access to the Price Range from the Whataroa valley. These were serviced by swingbridges at Harry Creek, Jack Creek, and Butler Junction. The Harry Creek bridge provided access to a track leading up from the Gunn River confluence to close to where Stan would eventually build his hut. The bridge is long gone the River not fordable which makes reinstating this most direct route unworkable. Currently if you want to access Stans Hut by foot the options are limited and none particularly easy or straightforward. It is possible as I did to bush bash from the swingbridge above the Perth confluence through the mid section of Reynolds Creek and up the bush faces to point 990m just below the Hut. It's rough going with bluffs, some gorgy bits in Reynolds Creek, and dense alpine scrub for the last few hundred vertical metres. This is roughly the line Permolat is proposing to DOC be cut and marked by the Group. Allow 8-9 hours from the road end for the current untracked version.

Tracked access up onto the Price Range is via the Gunn Ridge tops track from Butler Junction using the swingbridge there. The track was OK but starting to get overgrown in places at last report in 2021.  From the top end of the track it is possible to sidle around the northern flanks of Gunn Ridge into the Gunn River basin. There is a small dry rock in the middle of the basin that can sleep two at a pinch. Mt. Cloher can be approached up a tiny side-creek at BW16 856 937 on the TL of the stream draining it, or up the spur at BW16 850 939, then sidling across an upper basin to the peak. The rest of the Range around to Stans is very easy travel in good conditions but it'd be a long day from Butler Junction and probably more sensible and fun to break it up and camp or bivvy out in Gunn basin. The top entrance to the track down to Stans is at E13893963/ N5196351.

Type
Stans Hut is an unique design, not having been constructed by a government agency. Stan initially had a tent camp at the site from where he operated his hunting safaris and in 1985 acquired  a lease from the NZFS to build a hut there. This was your standard shed-type structure with four bunks and a side and front window. It was a basic wooden frame with flat iron cladding walls and roof. A few years after it was gifted it began to leak badly and DOC were going to pull it down so in 2007 custodian Garry Mullings took a team in to affix a new steel tray roof and new trusses. The material from the old roof was used to build an enclosed porch and the main door was shifted out into this. The hut roof interior was lined at the same time. In 2022 a solar panel and battery was fitted along with internal and porch LED lights, and USB ports. There is a toilet with great views and water is from a small creek 20 metres from the Hut.

Condition
Stans Hut is in good condition currently. In 2022 a joint NZDA/ SCI project led by David Keen and funded by BCT carried out a complete external paint (with paint supplied by Dulux), fitted new stainless tie-downs and anchors that were re-dug and concreted. The solar system was installed along with various other minor weather-proofing and drainage tasks. The toilet also benefited from new tie-downs, and a repainted door. The Hut has a hardly noticeable downhill lean and Gary thinks it could do with levelling at some point. 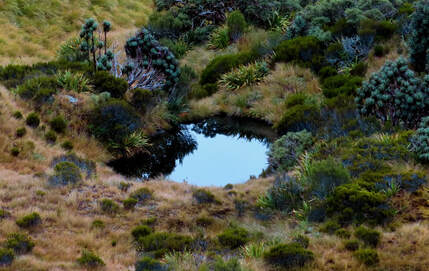 Tarn on the Price Range
Routes
The Price Range north of Stans is good travel as far as Fardowner Peak. It is easiest to sidle across the benches east of Gunn Peak to avoid a rough piece of ridge. The main ridge NW of Fardowner Peak is initially steep but traversable, however the section just before Pt 1522m has guts and rotten rock walls that make further travel impossible. The east ridge of Fardowner leads down to Pt. 1106m and a spur heading NE from it offers a hard, steep scrub-bash down to the lower Whataroa. There was a tops track put in by locals from somewhere in Big Creek but I have no idea where this is or what state it is in. There is also an unofficial route up onto the Price Range from Gaunt Creek in the Waitangitāhuna valley. I don't have any information on the state or location of this either.

Repairs Needed
The hut could do with levelling at some point although the lean is hardly noticeable. A track up from the Whataroa/ Perth swingbridge would be a great idea and open the hut up to foot access.

Provisions on site
The Hut is well-provisioned with cutlery, crockery, pots and pans. There is also a camp oven and about 10 years supply of toilet paper and kilos of salt. There is a first aid kit, broom, hearth brush and shovel, two plastic basins, four chairs, four plastic chairs, a shovel. a rake, and two solar showers.
Powered by