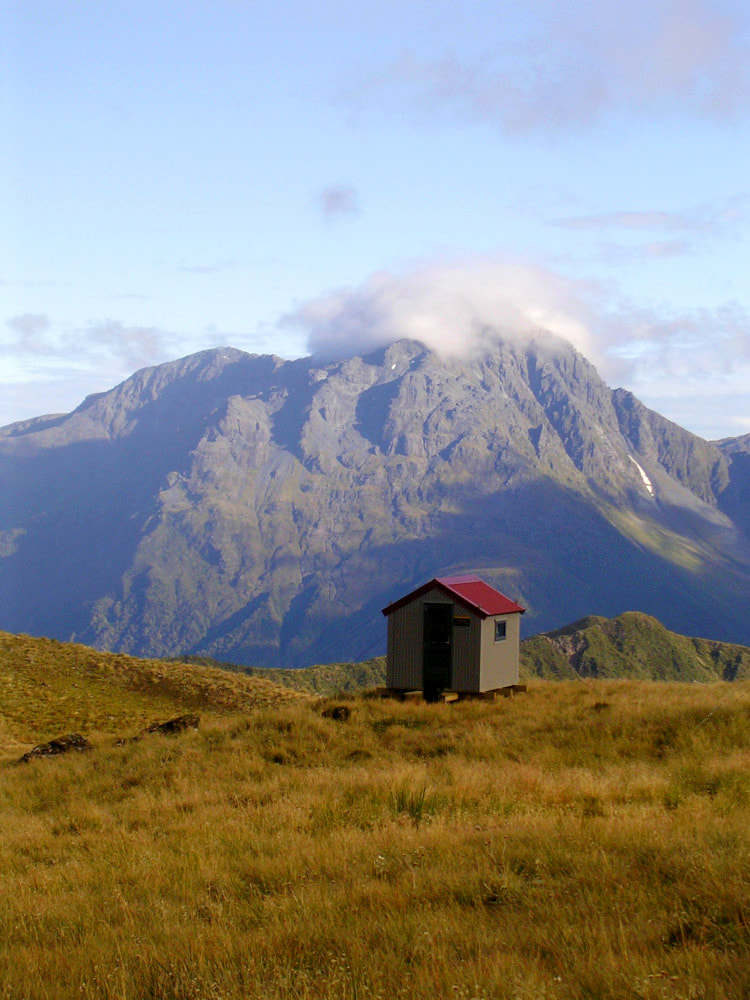 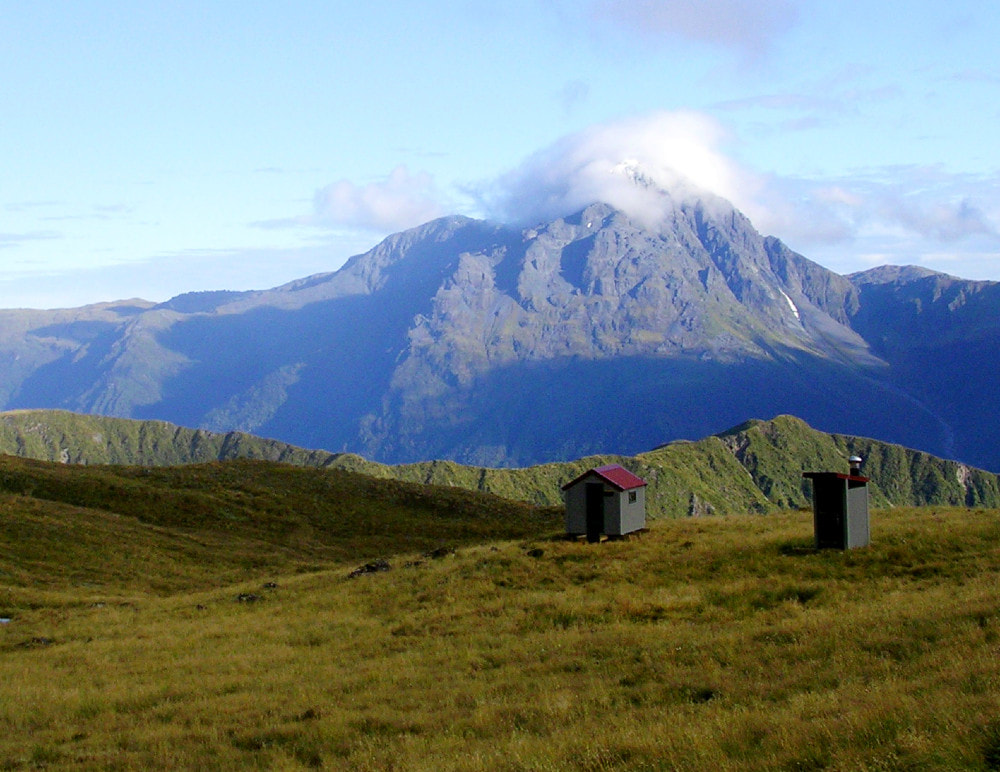 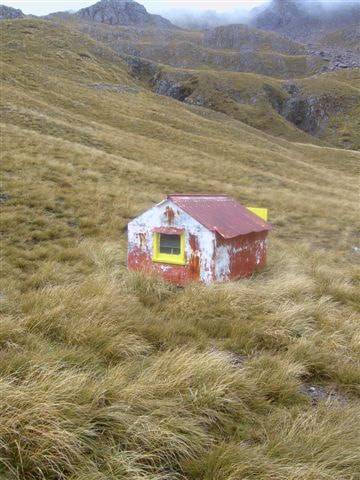 Maintenance Status
Pfeifer Biv is currently fully maintained by DOC Arthurs Pass. The access route and track up Paratu Creek and from Waharoa Saddle is maintained by Frank King and Honora Renwick of Christchurch.

Location
Taramakau catchment. Map BV20. Grid Ref: E1490868/ N5260180 (BV20 909 602). Altitude 1295m. Pfeifer Biv is located in a picturesque tussock basin on the Aicken Range, more or less directly above Lake Kaurapataka. The small creek adjacent to the Biv drops over the lip of the basin and down a vertical face into Pfeifer Creek. The tops in the vicinity are relatively easy travel, and dotted with small tarns and numerous good camping spots. There are spectacular views from the Biv out over the Taramakau valley to Mt. Alexander and the Kaimata Range. Kiwi can be heard in the basin after dark. Pfeifer Biv is an overnight tramp of moderate difficulty and currently receives around 20 visits per year.

Access
Pfeifer Biv is usually accessed from the Deception River via Paratu Creek and Waharoa Saddle. From the Deception carpark on SH73, cross the Otira footbridge and head up the TR of the Deception for around one kilometre. Veer off from the River and head East through patches of regenerating bush and farmland to Paratu Stream. Head up Paratu Stream taking the TR fork at the 560m contour. At the 820m contour the track leaves the main watercourse on the TL and continues up a less prominent watercourse through montane forest to Waharoa Saddle. The Saddle has an open scree at its top with views of the Taramakau and the Pfeifer tops. A track leads up the ridge from the Saddle through the alpine scrub to the open tussock. The route gets a bit of maintenance around once a year by Frank and Honora.

Once in the open the trail goes up and over a knoll, then climbs to flat area with a reasonable sized tarn at 1364m. Continue up the spur to a rocky knoll at 1460m, then drop East down the edge of a rockfield and over a series of benches into the tussock basin below. Follow the fault scarp at the lip of the basin up and around the next spur into a second basin where the Biv is located. If you don't have GPS, fine weather and good visibility are essential for the tops section. Allow 4-6 hours for the journey from the Highway to Pfeifer Biv. 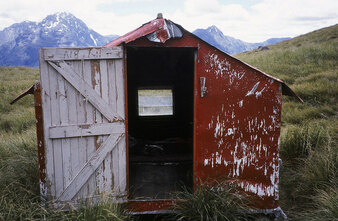 Original Biv
Type
The current Pfeifer Biv was built in January 2008 to replace its dilapidated predecessor built by the NZFS in the early 1962. It was a standard B55 design that wasn't maintained after DOC took over from NZFS in 1987. The new Biv is a good example of over-the-top, and ridiculously expensive hut design. The standards to which it is constructed are totally unnecessary for basic high country shelters. The Biv is mounted on a steel sub-floor and secured with tie downs. It is lined, has a double-glazed window, two sleeping platforms with mattresses, and a cooking bench. A large and ostentatious toilet, half as big as the Biv itself, stands like a sentinel nearby. Water is from some small tarns just below the Biv, or the creek.

Condition
Pfeifer's design and construction fails to strike a good balance between light, ventilation, and insulation. The larger of the windows and glassed door are South-facing and the interior holds the chilled air like a good refrigerator and is damp from condensation. It probably doesn't dry out at all during the colder months. The biggest pane of glass on the door is not double glazed and there are areas of mildew developing on the interior North and end walls. This never happened with its wooden frame,  flat iron clad with tar paper and chicken wire lined predecessor. Another feature that hasn't fared well is the polystyrene underfloor insulation, which Kea have discovered and methodically shredded into thousands of small particles, now scattered like hailstones around the Biv. The ties downs were very slack in November 2012 and there was No. 8 wire twisted and threaded through the turnbuckles, presumably to stop people adjusting them. The NZFS used to wrap the turnbuckles in denzo tape and leave a spare roll in the Huts. 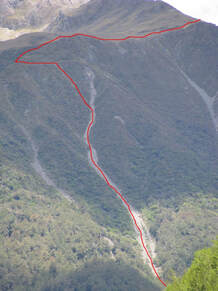 Route down into Pfeifer Creek
Routes
The Aicken Range tops are easy travel in both directions from Pfeifer Biv in good conditions. Mt. Pfeifer is a 45 minute scramble when snow-free, and has great views. Access down into Pfeifer Creek is possible from the first basin East of the Biv basin. It is a relatively easy sidle around, with a bit of altitude needing to be gained to stay above some scrubby bluffs. Once in the eastern basin, head through patchy scrub along a small scarp at the basin's lip onto a bench. Two cairns here mark the start of the route which is down the steep scree below. The scree joins another on its TR further down, and there is a permolat marker here for those coming uphill. Continue down the scree to a small-side branch of Pfeifer Creek. There is a red permolat marker on a tree in Pfeifer Creek just below where the side-creek enters. Boulderhop from here down to the Lake Kaurapataka track.
The NE spur of Mt. Pfeifer can be used as a route to the saddle at the eastern end of Lake Kaurapataka, but is a fairly long scrub and bush-bash, and rough going in places.

A fine weather alternative for getting off the Aicken Range for the more experienced, is down Tutu Creek into the Lower Deception. Access into the head of Tutu Creek is down a scree immediately South of point 1591m. The top of the scree is vertical and unstable and needs to be accessed from a steep tussock rib on its TL. Sidle off the rib onto the scree around the 1500m mark. The scree is narrow and steep initially with loose rock, but becomes broader and more stable lower down. It enters Tutu Creek at the 700m contour, and this is followed down to the Deception River. Follow the Deception valley track form here down to the Highway. Allow 3-4 hours to reach the Deception carpark from the Biv.

Repairs needed
The Biv ideally needs to rotated 180 degrees so that the door and side window are north facing. Whether the additional light and warmth would solve the mildew problem remains to be seen. If DOC decide to replace the underfloor insulation (I suggest they don't bother), then it would have to be kea-proof. A roll of Denzo tape could be provided for the tie-downs.

Provisions on site
One aluminium basin, and a hearth brush and shovel.
Powered by