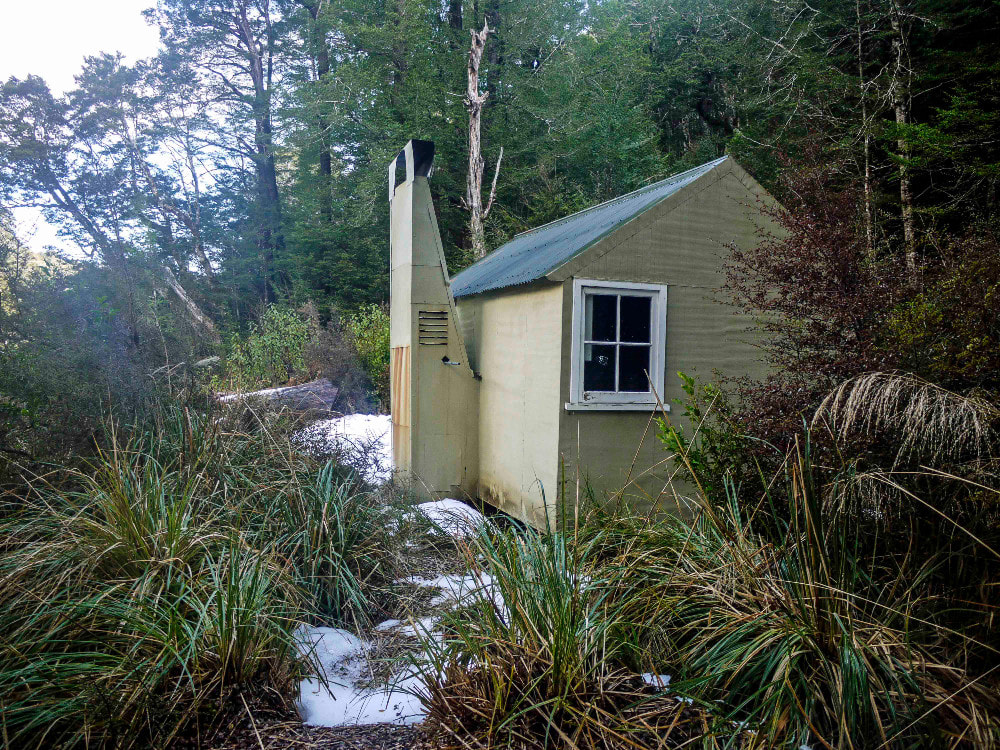 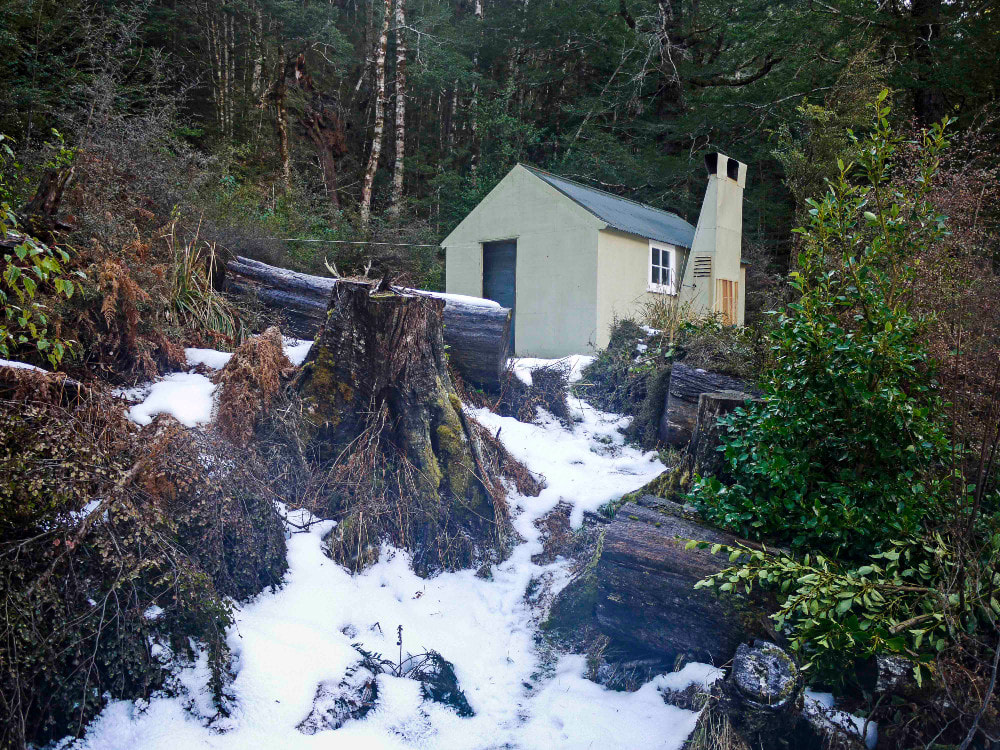 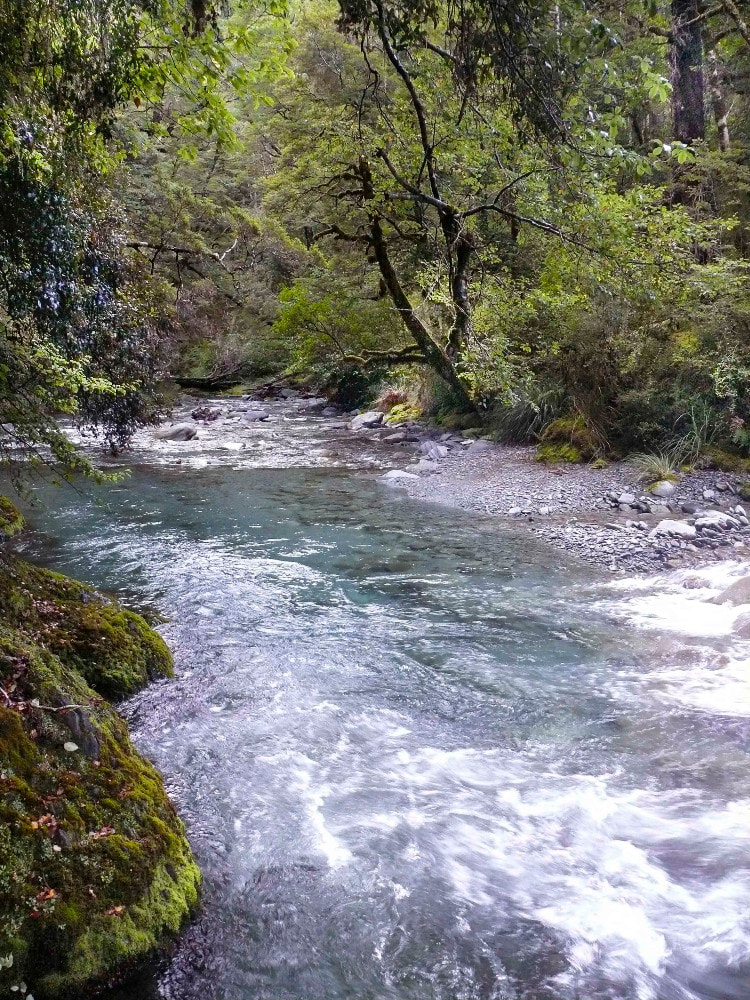 Maintenance Status
Pell Stream Hut is designated as minimal maintenance and DOC Greymouth currently manage the valley. The tracked sections up Pell Stream from the Alfred River are not officially maintained but have been kept open by volunteers. The over 40's Tramping Club did some major work in 2014, Andre Winkelman gave it a trim and added markers in 2020, and Paul Mosley and Ian Wright opened up the route's upper section in January 2021.

Location
Maruia River catchment. Map Lewis Pass BT23. Grid Ref: NZTM E1545456/ N5313947 (BT23 455 139). Altitude 720m. The tracked sections of the Pell are not marked on the NZ Topomap website. Pell Stream Hut is located on the edge of an open river flat on the TR of Pell Stream. There are views of the Mueller Range and whio, kaka, kakariki, and long-tailed bats can be encountered in the area. Old gold workings are evident in the lower sections of Pell Stream and there are several deep vertical shafts beside the track. The Hut is a 4-5 hour walk from the roadend, and received 16 visits in 2020.

Access
A vehicle track that fords the Maruia River and goes up the TL of the Alfred River is only usable by high clearance, short wheelbase 4WD vehicles, and it involves about 500m travel up the Alfred River bed and a steep climb out. Better to walk it. The Pell Stream track is sign-posted shortly before the 4WD track drops into Pell Stream. An alternative route in is from the Lake Daniels Track at the sign pointing to Pell Stream. Cut down a gentle spur from the sign and ford the Alfred River below its confluence with Pell Stream. Those using this route will get to see the surprisingly well-maintained gold miner's hut on the TR of the lower Pell, the future of which is uncertain currently.

The route up the Pell is benched and well-marked to Gilchrist Creek. For the next 1.5 km it is a mix of river travel and short tracked detours. There is a bit of wading involved and several crossings and it would probably be possible to stay on the TL the whole way if the river was too high to ford. A section of the track has been washed away just above Gilchrist Creek where the track arrives at the Stream. A few hundred metres further upstream, a fresh slip on the TL that left a pile of trees across the route was mostly cleared out by Jan Kupka and Michal Klajban in October (only a couple of trunks left but easy to go under). A track around a gorged section starts at the large unnamed side creek on the TL at E1542348/ N5313231 (BT23 423 132). There is a fresh pile of trees down on the TL of the creek that needs to be skirted. The track climbs up a steep rib onto a terrace, skirts Point 760m and drops back to Pell Stream at E1543686/ N 5313611. This section is reasonably well marked, but has some low seedling regen in several places. A new 1.8 km section of track, cut by Ian and Paul in January 2021, leaves the river a few tens of metres further upstream on the TL, and climbs onto a terrace up to 760m, crosses a deeply incised gully, then sidles and drops back down to the river at E1545259/ N5313884, about 200m downstream from the Hut. There is a good crossing 100m further up to reach the Hut on the TR bank. There is also an adequate route on this last section that is closer to the Stream and stays on the TL for the last 2 km before  the Hut that can still be used. 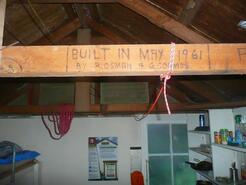 Inscription on the Hut rafter
Type
Pell Hut is an S70 design built in May 1961 by G. Coombs and R. Osman of NZFS Reefton according to the inscription on the interior cross beam. Although a six-bunk design, Pell has only four bunks, with a gun rack and bench filling the space between the bunks. It has an open fire that smokes a little without the window open. Water is from the Stream nearby and there is a long drop toilet. The Hut is in a shady location and reputedly very cold in winter.

Condition
Pell Stream Hut is in good condition currently. It was painted inside and out, provided with new mattresses, and had the bench steel-lined by DOC in 2004. DOC replaced a cracked window in 2014. Brent and Co. dug out around the base of the Hut and put some sealant around the fireplace in 2014. In 2018 Andre and Corina Winkelman resealed the leaky chimney flashing and attached a length of spouting to the roof edge above it to divert water and leaves away. They also cleaned the mattresses and cut back a bit of the surrounding vegetation. DOC Reefton were there in March 2018 and January 2019 doing maintenance and clearing the vegetation around the Hut. They replaced the lead head roof nails with tech-screws, repainted the roof and outside walls, fixed the sash on the end window, painted the window frames, inserted a new fire surround, and topped the base of the fireplace with new concrete. The right door end rafter is damp from water running down it, as are a few of the door end studs and dwangs. Not sure where it's coming in, maybe the ridge flashing. The timber although damp appears sound. In October 2021 Andre Winkelman replaced a cracked glass pane in the end window.  The sash was eased and repainted by Charlotte SB and Tobi Wulff in October. Care is still needed not to force the window open or shut. 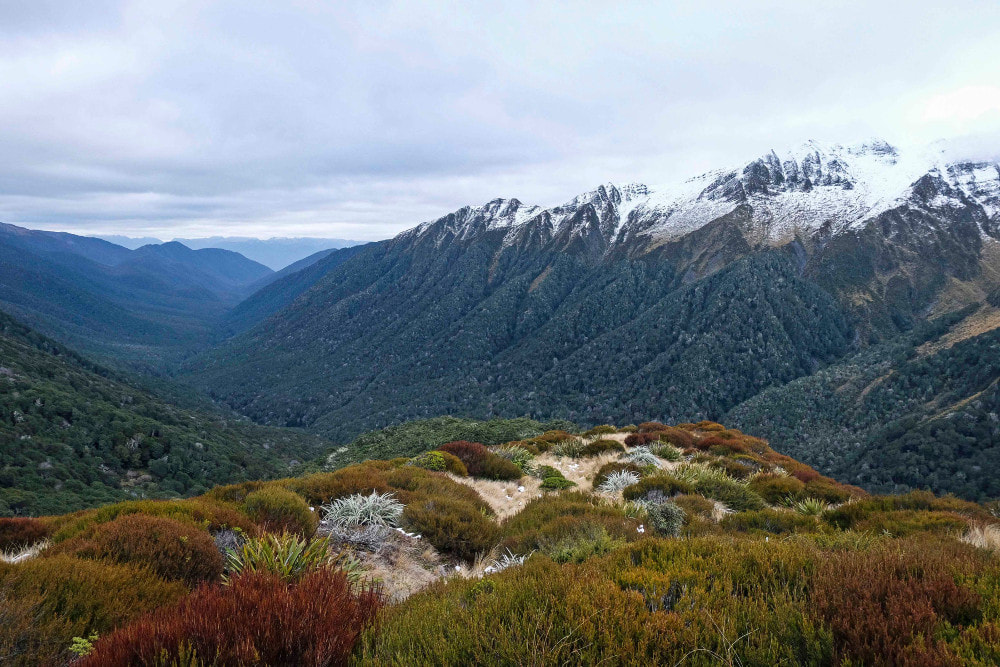 Looking down the Pell from Pt. 1300m in the head of the valley - Photo Geoff Spearpoint
Routes
There is an untracked route up into the head of Pell Stream and over saddle 1345m into the Maruia valley. The river is OK travel however there is a lot of windfall in the streambed and a few waterfalls and bluffs in the head that need negotiating. An easier option is to sidle up and along the bush faces on the TL of the Pell, staying a reasonable distance above river the whole way. The forest is very open silver beech and pretty good travel mostly. It gets a bit thicker and scrubbier in the head of the valley but there is a good deer trail through a lot of it. Where the river bisects the 1000m contour, swing SE and head straight up the bush faces to Point 1300m. Sidle from here around the 1300m to the saddle at Point 1345m. Drop directly from here into the catchment below. A steep scree takes you into the head of a small side creek. Sidle out of this on the TR at about 1060m and make a line through the bush, roughly SE, down into the Maruia. You should come out on a river flat 15 minutes upstream from Cannibal Gorge Hut. Allow a good 5-6 hours for this crossing.

The tops above the Glenroy River can be accessed up the TR branch of the Pell.

Mt. Mueller can be accessed by a number of untracked spurs from Pell Stream. A high circuit of the Freyberg Range can be done using the spur just upstream of the Hut for access. Access to the Range from the Maruia Valley is via two tracks, neither of which is officially maintained or marked on the Topo maps anymore. The Mueller Tarn Track is accessed by fording the Maruia River at the layby beside Maruia Springs thermal resort. The entrance is 500m downstream from the Resort's thermal pipe (at E1544547/ N5308043 (BT23 445 080)), and is marked with Cairns and a white triangle. Peter Alspach of Springs Junction has marked the track to around 900m with permolat, and a bit of cruise tape, and plans to go back and do more work there next summer. The track is steep and reportedly a bit hard to find where meets creek for the first time.

A second route onto Mt. Mueller starts at the layby one kilometre West of the Waterfall Walk, opposite the "Rest Stop 300m" sign. Head 100 metres up the riverbed and ford the Maruia where it cuts into the bank. A white plastic triangle and red permolat mark the track entrance. The track climbs up onto the terrace at E1538150/ N5310621 (BT22 382 106) and is well marked with red and white permolat. Peter Alspach has done some clearing and marking work on it and intends going and doing some more at some point.

Repairs Needed
Peter Alspach and his partner hope to go in soon and do further work on the track section upstream from Gilchrist Creek. The track copped a bit of damage from a storm in July 2021. Nothing too bad but it needs a bit of tidying up in a few places.  and then where the track climbs up at the unnamed creek to go along towards Pt 760, a bit more of the rib has fallen off bringing down a pile of trees across the approach on the TL of the unnamed creek.

Provisions on Site
There are two billies, a pot, three fry pans, the camp oven has been nicked by someone, two plastic buckets, a gas cooker, a tomahawk, an axe, a saw, a plastic hearth brush and shovel, a hammer, a flathead screwdriver, a small machete, a supply of permolat and nails, and some bleach in marked bottles for doing the mattresses.
Powered by